The ISO Renewal Faction affirms that Shaun J (Cambridge, MA) and Vanessa B (Washington, DC) are members in good standing of the ISO, with all the rights and responsibilities thereof. They have been excluded from membership, in violation of our Rules and established practice, by the Steering Committee. We reject these bureaucratic maneuvers and call on all members to recognize and defend the status of our comrades. We appeal to Convention to clarify the situation by reaffirming that Shaun and Vanessa are members in good standing.

The case of Shaun J

Shaun resigned from the ISO on August 29 after being publicly vilified by the Boston district leadership; his resignation was announced publicly on September 3. On October 6, an appeal calling for Shaun’s reinstatement following apologies from the district leadership and the Northeast Regional Organizer was published in Internal Bulletin #3.

The appeal was accompanied by a reply from the Steering Committee. They wrote, “Because Shaun’s resignation on September 3 [sic] was his own decision, the question of his reinstatement should be up to him.” This reply showed zero sensitivity to the conditions under which Shaun left the organization after nearly 15 years; nonetheless it made it clear that Shaun was welcome to rejoin the group at his discretion.

In separate conversations with the leadership of the newly-formed Cambridge branch and Shaun on October 6, SC representative Ahmed S conveyed that it was the SC’s desire that Shaun should rejoin the ISO in the Cambridge branch before Convention 2014. This was the last time any SC member communicated with Shaun or the Cambridge leadership about rejoining until after he actually did on November 13.

During the intervening month, Shaun continued to write on politics, including critical pieces on the perspectives and practices of the ISO–exactly as he had while he was a member. A number of comrades who had left the organization earlier–such as the Socialist Outpost (Chicago) group, Scott J, and the Bay Area group–published critiques as well, completely independently of Shaun.

Shaun has found value in all the critiques and does not consider any of them to be intrinsically hostile to the ISO. (They may be hostile to the current leadership of the ISO–but that is not the same thing.) He has corresponded with the critics, both to understand their arguments better and to contest them where he has disagreed and found them inaccurate or lacking. He has not formed any kind of “bloc” with them, as senselessly alleged by the Northeast Regional Organizer.

In late October, Shaun approached the leadership of the Cambridge branch to discuss coming back to the ISO (a decision he discusses on his blog). On November 13, after a branch discussion (which Shaun was not permitted to attend), he was readmitted to membership in the Cambridge branch.

After Shaun rejoined, the SC “reimagined” its position on Shaun’s reinstatement. On October 6, it asserted that “the question of [Shaun’s] reinstatement should be up to him.” In its November 21 letter to the Boston district, the SC flagrantly contradicts itself, writing: “The decision to rejoin the ISO is not his alone, and is subject to approval by members of the entire Boston district, the regional organizer and the national organization, as represented by the Steering Committee.”

This extraordinary procedure for “approval in triplicate,” completely without precedent in our experience, was never communicated to either Shaun or the Cambridge branch. A reply to the SC letter from members of the Cambridge branch defends their decision to readmit Shaun in more detail.

Shaun has done nothing since resigning that he was not doing as a member in good standing–activity for which he faced no disciplinary sanction. The SC has merely exploited Shaun’s resignation under duress to keep him out, improvising barriers to his rejoining as its attitude to criticism has become increasingly brittle and sub-political.

The exclusion of Shaun J is in violation of the Rules and established practice of the ISO. We refuse to recognize it.

The case of Vanessa B

On the afternoon of Tuesday, November 12, SC member Keeanga T provoked a confrontation with Vanessa online, attacking Vanessa in the most personal and uncomradely manner; eg, “I don’t really care what you’re a member of beyond the triflin’ ass bullshit committee.” (The full Facebook exchange, now deleted, is reproduced below as Appendix A.) This followed a number of interactions online in which Keeanga was, in our view, needlessly hostile to Vanessa.

Within half an hour of the November 12 exchange, Vanessa received a message from Tristan B of the DC Branch Committee informing her that she was no longer a member in good standing per an email from…Keeanga. She was instructed to contact Ahmed for details, which she did right away. (The message from Tristan B to Vanessa is reproduced below as Appendix B.)

Two days later (November 14), Ahmed replied, writing: “The reason we (at the National Office) don’t consider you a member in good standing is because we have no record of you paying dues. If I am mistaken, please inform me.”

He was mistaken, and Vanessa informed him that she had paid dues for October, in cash directly to the branch treasurer. Ahmed then replied, “if you are referring to the $6 you paid in October that’s not paying anything close to scale.”

Yet as Vanessa pointed out, how could Ahmed know if her dues were “close to scale” without knowing her income or personal circumstances? As Vanessa explained, “I am on disability so my income is extremely low.” Even if he did have this information, it is not Ahmed or the National Office’s place to make the determination. As the final paragraph of the organization’s Rules state:

Any member with particularly difficult financial circumstances or unusually high expenses may negotiate a lower rate of payment with their branch treasurer, or in the case of members at large, with the national treasurer. [emphasis added]

Vanessa is not, and has not ever been, a member-at-large. Therefore if her branch treasurer is satisfied with her dues level, given her personal circumstances–that is the end of it.

Having had two excuses thwarted, Ahmed demanded the following: “send me records of your dues payments over the last year.” Unsurprisingly Vanessa, who paid dues in cash, was unable to provide these nonexistent “records.” Declaring this “not an adequate response answer [sic],” Ahmed concluded that Vanessa was not a member in good standing. (The full correspondence between Ahmed and Vanessa is reproduced below as Appendix C.)

It is clear enough what is going on: the decision to de facto expel Vanessa was made first, and the justification for it “thought up” subsequently. Two cover stories having been falsified almost as soon as they were offered, Ahmed makes a demand that he knows will be impossible to satisfy. The non-satisfaction of this absurd request is then retroactively made the “basis” for a decision already taken.

The exclusion of Vanessa B is in violation of the Rules and established practice of the ISO. We refuse to recognize it. 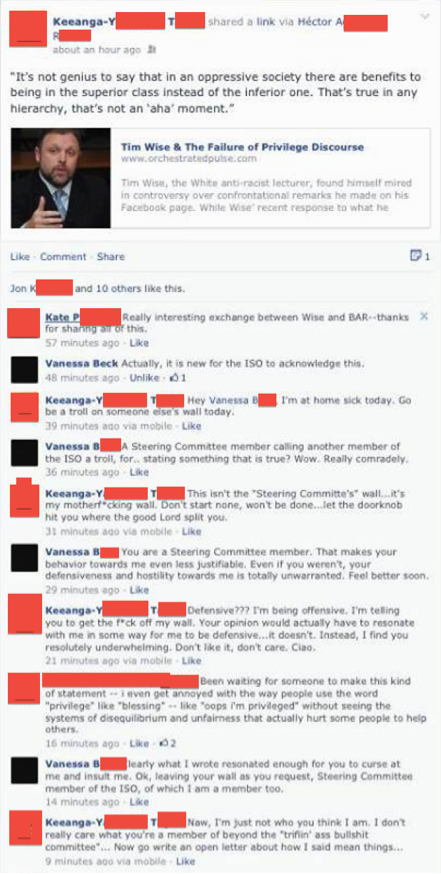 Hope you’re doing well. I received an email yesterday from Keeanga stating that you’re not a member in good standing and need to contact Ahmed about this. Ahmed can be reached at [redacted]. I would suggest getting in touch with him as soon as possible.

Appendix C: Correspondence between Ahmed S and Vanessa B

Tristan emailed me that Keeanga told the BC yesterday that I am no longer “a member in good standing” and that I should contact you about this asap.

What is the basis for this (and how and why is this coming from Keeanga, who posted on Facebook today that I am a “trifiln’ ass bullshitter,” among other things)?  Tell me what rule it is I have allegedly violated that justifies revoking my membership, with reference to where I can find this rule.

I noticed that I was cut off from the branch listserve yesterday, before I was even notified this afternoon that I am no longer a “member in good standing.”

I have attached a screenshot of the Facebook conversation I mention above.

I look forward to your reply,

The reason we (at the National Office) don’t consider you a member in good standing is because we have no record of you paying dues. If I am mistaken, please inform me.

I asked Keeanga  to communicate this to the Washington, D.C. Branch. Keeanga is the National Office contact with the D.C. Branch and has been for some time.

The rules in question are located in the Members’ Toolkit under “membership.”

Thanks for attaching the screenshot of the Facebook exchange with Keeanga. That’s between the two of you and has no bearing in my mind to this question.

You are mistaken. Like many comrades, though I am not on dues check off, I have always made arrangements with treasurers of the branches I have been in to pay in cash.  (I am on disability so my income is extremely low.)  I made arrangements with the treasurer in DC and paid most recently in October, at the 2nd or 3rd meeting I attended here. He told me many comrades pay cash and are not on dues check off, I hope their memberships are not in danger too.  I’m sure he would be happy to confirm this with Keeanga since she must have forgotten to check with him.

I expect to receive an email confirming that this was a mistake and i am indeed in good standing as soon as possible.

I will address desperately the abusive language of a steering committee member I’ve endured.

No, I don’t think I’m mistaken. So please send me records of your dues payments over the last year.

And if you are referring to the $6 you paid in October that’s not paying anything close to scale. And it certainly doesn’t make you a member in good standing.

As far as addressing the abusive language of a steering committee member “you’ve endured,” I can only assume that is another reference to your exchange with Keeanga on Facebook. Address it as you wish.

Ahmed, how would you know what is close to scale when you do not know my income? My branches have never had a problem sliding the scale as low as I need it to go. Not paying a certain amount when you are experiencing financial hardship breaks no rule that would put me not in good standing. So unless you can name an actual rule I have broken, I expect am email stating I am indeed in good standing and to inform my DC. I do not have a record, I pay in cash, like many comrades.

Of course I am referring to the incident with Keeanga.

As far as I can tell, you have paid $6 in dues since September, when you arrived in D.C. What have you paid in addition to this over the last year? I asked you for a record, and you haven’t provided one. “I do not have a record….” is not an adequate response answer.

(As you can tell, your assertion in your email ” I’m sure he would be happy to confirm this with Keeanga since she must have forgotten to check with him,” is false since Keeanga did check with David. )

There’s a big difference between financial hardship and working that out with the National Office, and the idea that you can be in and out of the organization, paying dues or not,  as you see fit, while claiming the benefits of membership.

Put bluntly, if you want to participate in the internal life of the organization and its discussions and debates, you have to be a member in good standing.

But you are not.

6 thoughts on “In defense of our comrades”